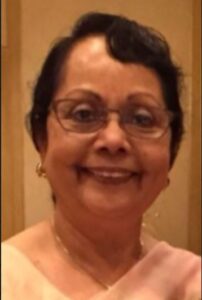 My memories of my life go back to my childhood growing up in Comilla. I had a normal life, going to school and doing homework. We had to study seriously to get the best scores.  My father was very invested in our academics and when we did well on the tests he would brag to the neighborhood. In addition to having teachers for academics, we also had a religious teacher to learn the Quran. My mother was very religious and valued those things. Sometimes for fun we would play badminton in our front yard, we could do that because we had a high wall and nobody could see us.

When it came to music, we never really had a chance to learn. My mother was very strict so music was forbidden. We tried to listen to Hindi music on radio with low volume. During the Puja festival we would get to listen to beautiful Hindi music and other kinds of music playing all around us. I loved those songs and I can still hear them in my head to this day.

I finished school and college. I always wanted to be a doctor and I was accepted into Dhaka Medical College. These were the best years of my life. I remember my first taste of freedom, getting to watch movies and eat in restaurants with my friends. We studied day and night to keep up with our classes and exams. During that time, some my friends decided to learn music at the Bulbul Academy of Fine Arts. I turned them down, thinking it would be better to study hard rather than waste time on music. Thinking back, maybe if I had gone, I might be more advanced now. There is no point in regretting the past, though. Since then I have been learning and improving.

In medical school we used to go up on the roof when there was a full moon and sing Tagore songs like “Chander Hashir Bandh Bhengechhe”. I’m still in touch with many friends from Medical School, we go to conventions and have class reunions once a year in different locations around the world. We reminisce about our life at Dhaka Medical College.

After graduating, I got married and moved to New York, then Michigan in 1979. Routine life continued, I was working and raising my three wonderful daughters, Jasmin, Nasreen and Nureen. Around 1994 or 95, at one of our medical conventions in NY, I saw Dr. Showkat Hossain singing  “Ei Sundar Swarnali Sandhyay” on stage. I was mesmerized. He sang in medical school but I never got the opportunity to see him because I was too busy with my studies. So, he gave me the information for his teacher, Akram Hossain , who had just moved from New York to Michigan. This was a new chapter in my life and I started learning music from scratch.  Akram Hossain had open-heart surgery complicated with a stroke. After staying in the hospital for a few months and getting rehab therapy, he got better but his speech was still impaired. Amazingly, he could still sing. I restarted my lessons. Our tabla player, Amit Chatterjee, used to pick him up and bring him to my home for lessons. This was great both for his recovery and my continued musical education. I have had many struggles in my own life but I never gave up my lessons.